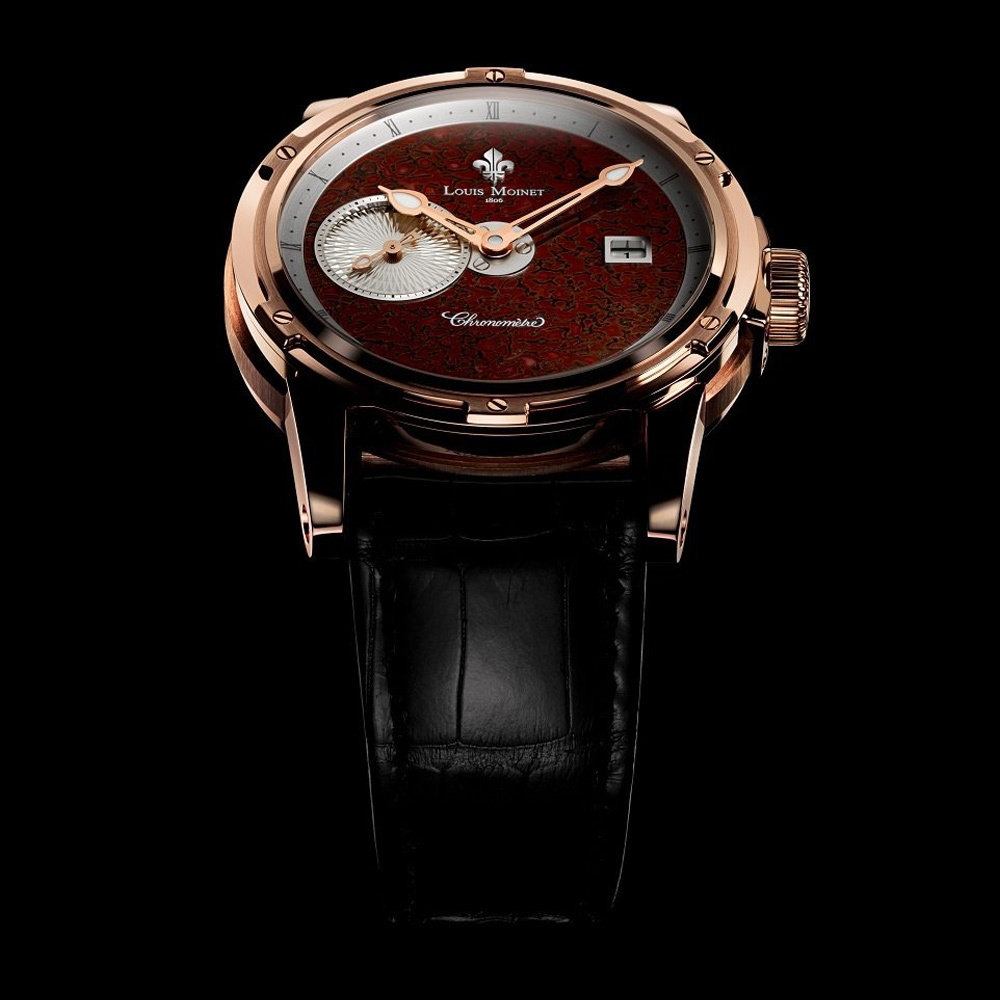 Louis Moinet continues to explore the world of extraordinary dials. For the first time ever the Mecanograph, winner of an International Chronometry Competition prize for its outstanding precision, now boasts a dial made from 150-million-year-old fossilized dinosaur bone.

As every fan of Ateliers Louis Moinet knows, the firm loves all things beautiful, unusual and exceptional. On its Mecanograph City watches, it was the first to include fragments of lunar meteorites and other rocks from the far-flung corners of the universe.

Meanwhile, the Treasures of the World collection has opened up another creative path: that of dials made from rare, fossilized stones of mineral or plant origin, including petrified exotic wood.

Today, the two approaches have now been combined: the Jurassic Watch, derived from the Mecanograph family, is the first to feature a dial made from Jurassic-era dinosaur bone – between 145 and 200 million years old.

The mechanical heart of the Jurassic Watch is the certified Mecanograph chronometer. This proprietary movement has been exclusively developed by Ateliers Louis Moinet.

It boasts not only extraordinary precision, but also a dial made from a genuine fossilized 150-million-year-old dinosaur bone. In another first, the caliber features a date window located at 3 o’clock. It also uses the exclusive Energie Plus (*) process, unveiled by Louis Moinet at Baselworld.

“This type of masterpiece is highly charged with emotion,” explains Jean-Marie Schaller, CEO of Ateliers Louis Moinet. “For one thing, together with our craftsman Mr Daniel Haas, we’re working on an extremely rare material – fossilized dinosaur! In addition, just like the meteorites we already work with, this legacy from millions of years ago has come down to us today in excellent condition. Even though it’s 150 million years old, this fossilized dinosaur looks quite contemporary. Its texture recalls that of an abstract canvas; it’s a real honour to be able to work with a material like this.”

Specific craftsmanship is vital for the production of each dial. It begins with the choice of the right stone; this needs to be sufficiently dense to be worked on, taking into account its final size and texture. The ensuing handiwork takes over a week – and results in a dial thickness of just 0.65 mm.

The stylistic approach of the Jurassic Watch is absolutely clear: the beauty of the fossil takes pride of place. “There’s more to it than just aesthetics, though,” cautions Jean-Marie Schaller. “Immediately on release, the Mecanograph won a prize in the International Chronometry Competition, enshrining our desire to achieve ultimate precision: a core value for our Ateliers, whose founder, Mr Louis Moinet, not only invented the chronograph, but was also the pioneer of chronometry, measuring sixtieths of a second in 1816. Another advantage is that this Mecanograph features a broad dial surface; we’ve been able to make the most of that to show off the fossil to maximum effect. That’s how the Jurassic Watch came into being – a combination of chronometric excellence and beautiful craftsmanship.”

A relative of the Diplodocus

Described as being exceptional by experts, the colour and vein of these precious witnesses to the past have benefitted from excellent craftsmanship, in which the cutting and treatment protect the material itself. The dinosaur bone in question, discovered in North America, has been authenticated by renowned geologist Dr Andreas Stucki in association with the Aathal Dinosaur Museum in Switzerland.

The dinosaur bone is from the family of large herbivores, which also includes the Diplodocus. The Diplodocus is one of the most easily recognizable dinosaurs thanks to its highly distinctive shape, featuring both a long neck and a long tail. It was one of the longest dinosaurs, measuring up to 50 metres – and had an estimated weight of 50 tonnes!

Chronometer certified movement, 43.5 mm case made from rose gold. Date at 3 o’clock, seconds hand at 9 o’clock on the dial with a concentric Clou de Paris pattern, limited edition of 12 watches.