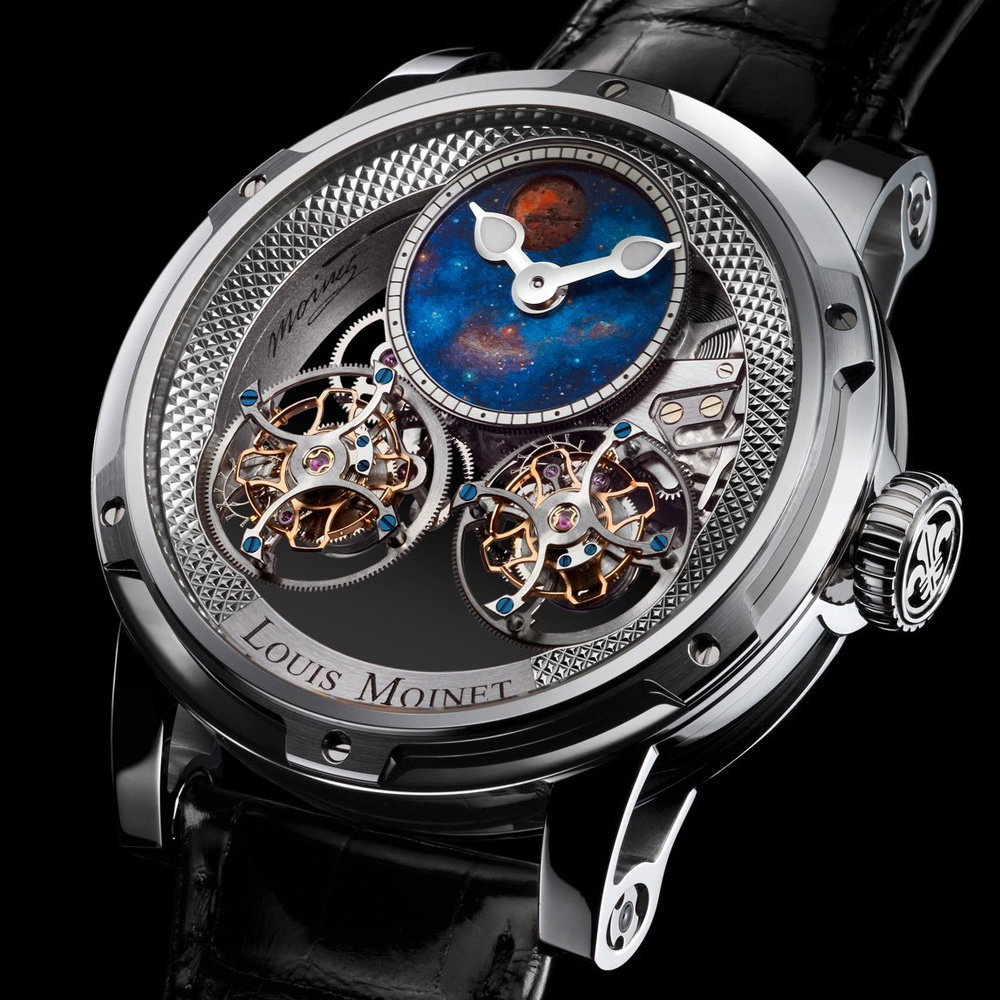 “Sideralis is an invitation to embark on an interstellar journey – a whole new kind of discovery that’s singularly technical and poetic”. The timepiece in question defies comparison, simply because to date, Sideralis does not have any equivalent anywhere in the world of watchmaking, and is protected by two patent applications.

Special feature number one
Both of these tourbillons are oversized, with cages measuring 14.9 mm – half as big again as the average. This is the largest assembly of two tourbillons ever to have existed.

Special feature number two
The two tourbillons are designed to be physically above the movement – above the dial, even. The two raised cages are large as life and wholly visible, revealing balance wheels with beautifully styled screws – and an absolutely incomparable aesthetic appearance.

Special feature number three
The tourbillons rotate in opposite directions. The continuous coming and going, side by side, is not just for stylistic reasons; the counter-rotation provides the motive power required for the star mechanism – the Sideralis complication.

Now, tourbillons move the planets
For the first time ever, a complication is driven by a double tourbillon: a time dial, situated at 12 o’clock, comprising two discs, one atop the other. The top one features a tiny hand-painted picture. This hand-crafted marvel depicts the universe and its constellations of stars and planets, painted one by one on a dark blue sidereal background. The animation completes one counter-clockwise rotation every 60 seconds.

At 12 o’clock on this upper disc there is a circular opening, through which can be glimpsed the three planets painted on the lower disc, seen to be rotating in the opposite direction at the same speed. The feature represents a wholly new conceptual and artistic approach.

Mars, Mercury and the Moon – physically present
Through the opening, the lower disc reveals the planet Mars, the Moon, and Mercury in succession. The inverted double tourbillon, powering an exclusive complication, is an unprecedented innovation, with two patents pending to protect it. The Sideralis caliber is also fully exclusive to Louis Moinet, mounted on a hand-painted aventurine dial that matches the universe depicted on the time disc. Sideralis comes in a 47.4 mm grey gold case – and in a limited edition of just 28 watches.